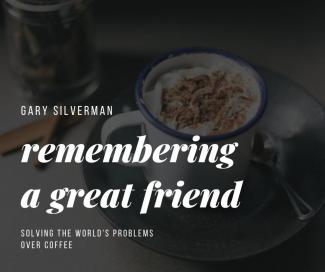 They Buried My Friend Today

For you, dear reader, it was last week; but for me, today they buried my friend.

I’m not sure if he was my best friend. Different people make different kinds of friends and I am blessed with several who could meet the definition of best. Still, “one of my best” isn’t strong enough. Is it okay that I have more than one best?

A couple times a month, under the subject “Solving the World’s Problems at 8th Street Coffee” we’d arrange to meet. Ours was mostly a coffee relationship. Full disclosure: he was the one with a medium-size black coffee sitting in front of him. I usually had some sweet blond liquid and a plate of something to eat sitting in front of me. The last time we sat down, it was a grilled cheese.

During the pandemic our meetings were fewer as I was in lockdown several times. Because of my cautious nature we shifted to Odd Duck’s outdoor patio. It got hot in the summer and cold as winter made itself known. Eventually the cold drove us back inside—though with the reduced morning occupancy and a strategically selected table minimizing potential virus spread.

We were very different people. He was born in Texas; I in California. He played football; I played in the marching band. His politics were from the right; I am more a moderate (Texas translation: liberal). He had kids, grandkids, great grandkids; I had none. We went to different churches. And he was a full generation older than I.

We were very similar people. Both married our high school sweethearts. Both owned businesses. Both accepted the grace of God and salvation though Jesus the Christ. And we both loved and respected each other.

Yes, we disagreed. A lot. Yet never was there anger, or belittlement, or judgment, or disdain. We would talk, we would listen, we would discuss. He heard my stories more than once; I heard his too, but it never bored us. Instead, each telling would bring us closer. In the end, we never did quite solve the world’s problems. We valued the attempt at the impossible. We valued each other.

Death was a topic that came up occasionally. I’m old—he was older—so it was easy for us to imagine the day. A bit easier for him due to some health scares perhaps. Now, “scares” may not be the right word, for he was not at all scared of the next step. After all, it was not a step into the unknown. His faith made it known: “...the substance of things hoped for, the evidence of things not seen,” as the writer of Hebrews states it.

I want to be filled with joy that he has been called home to his Master. But right now, it is at best a joy encapsulated with melancholy. It makes me feel a little selfish wanting one more time to sit at a table, coffees between us, and enjoy his company once more. But Jesus wept: He understands the loss of a friend.

Jeral, I hope they have coffee in heaven. It’s my turn to buy.