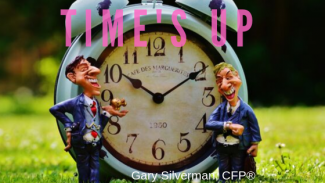 Time's Up for Old Excuses

Not long ago I was in Los Angeles at an investment symposium. It was an excellent educational meeting put on by a very large investment company. I learned a lot, met many experts that spoke on a variety of areas that affect both investing and financial planning, and was very well fed.
One of the last presenters toward the end of the symposium was a woman. That’s when I realized that, not only was she the first female speaker of the meeting, she was the only female presenter.
Of course, there were many women there. Women checked the attendees in and ensured we got our continuing education credits. Most of the interns who were helping were women just out of college. Yet when I ran the numbers (yes, I broke out my calculator), I discovered that exactly six percent of the attendees were women. So, of all the people who were rolled out in front of us as the experts, there was exactly one female expert to represent that six percent.
Before you begin thinking that this particular company is misogynistic, I should point out that this is an industry-wide (heck, it’s a world-wide) problem.
We’ve all heard the reasons. The one most often mentioned is that it takes time to get to the point of being considered an expert. Most of the presenters had over 20 years of experience in their field. The company has been trying to get more women to apply to their firm. My first thought was that the analyst and fund manager positions are both time and travel intensive, so if you want to spend time raising a family, well, it’s not an attractive job. After my editor, Tina, looked at this, she asked me to also consider thinking about how it is men have had both these positions and families over the last 20 years.
So, that leads right into societal problems. After all, pretty much every study I’ve read says women do a lot more of the cleaning, cooking, child rearing, child transporting than men even if they are working the same hours as the men (plus they do all of the birthing). (Tina says they also do the bulk of the invisible labor by carrying the mental load.)
Before you think I’m getting somewhere with this subject you should be warned: I don’t have an answer.
What I do know is that I noticed. Just like when I open annual reports from companies, I notice that more often than it should, all the people in the management picture (except sometimes the HR manager) is a man. If I notice, other people notice. And while there may be legitimate reasons why there is a predominance of men in a company’s leadership, too often that is where the discussion ends.
When there is a reason for an undesired situation to exist, and we continue to let it exist, then that reason becomes an excuse. When I first entered this industry 29 years ago, I heard that the lack of women in leadership roles was because it would take time for them to move up the ranks.
I’m thinking that time is pretty much up.