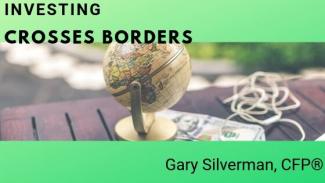 US Investments Reach Across Borders

“With the coming worldwide depression coming, I want to sell off all our foreign holdings and put the money into US companies.”

I’ve heard this sentiment or something similar lately, though it is a perennial sentiment with some of my clients. The idea is that we are the United States, we are safer and better than everyone else, so if something is going to go wrong it will go less wrong here. Plus, our companies are better, so even if nothing goes wrong, we should do better here.

You’ve heard me say that investing overseas is an important diversifier when it comes to investing. While I will freely admit that for the past many years this diversification resulted in less returns, I stick with that statement.

But today I won’t labor that point.

Instead, let’s pretend that the US will always do better than everyone else. Let’s pretend that our economy will win globally for the next decade or longer. Let’s pretend that investing overseas is just a stupid idea. Even if all that is true and you only buy stocks and bonds of US companies, you are still stuck with foreign investments.

Take the S&P 500 for example. This index of US stocks is probably the one most used by people who want to track and invest in US stocks (ignoring the other 3000 companies doesn’t seem to bother them). The S&P 500 is made up of 500 of some of the largest US companies. If you bought all 500 of the stocks (easy to do using index mutual funds of ETFs that track it) you would be 100% invested in US companies.

But those 500 companies don’t earn 100% of their income from the United States.

No, not even close. Last I saw, about 45% of the revenues generated by the companies in the S&P 500 come from overseas. Even if you chose to invest only in the good old USA you will still be very dependent on what happens in the rest of the world.

It’s just hard to invest without being dependent to a measurable extent with what the rest of the world is doing.

So, go ahead and invest only in companies domiciled in the U.S. if you want. Just don’t think you can be complacent about what’s happening in the rest of the world.