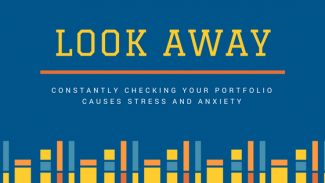 A Watched Pot Gives You Stress

It seems that the most popular program on TV today is the news. Sure, the news has always been very popular. But these days it seems that people are watching it non-stop while surfing the web for more news and then discussing (or arguing) with friends about what they just read and saw. What’s truly strange is that by-and-large the top story has been the same for nine months.

While I am pretty sure that this singular fixation is not very healthy for one’s psyche, there is one advantage to it. At least people aren’t watching the stock market every minute.

Of course, most of the time most people don’t actually watch the market every minute. But being in the business I am in, I tend to run into quite a few folks who watch it a lot. They watch what stocks are doing and how their portfolios are performing many times a month (and for some, many times a day).

Most of us don’t like it when our portfolios go down. The more often it happens the more anxiety and fear build inside us. Yes, the market comes back and then some. But behavioral scientists tell us that we feel the losses twice as hard as we feel the positive returns of an up market. This is true even though across time, the ups more than make up for the downs.

The economist Richard Thaler ran an experiment where people were told to mix two possible investments. The first had both higher returns and higher volatility (think stocks). The other was a lot less bouncy, but also resulted in lower returns (think bonds).

Half of the people were shown their portfolio results every month or two across the simulated years of growth. They became very conservative in their investments opting for less volatility (risk) over the possibility of higher return. The other group, those who only saw an annual performance number were happy to have most of their money in the riskier but better performing investment.

Thaler found that the more often people looked at their portfolios, the more fear and anxiety they experienced—and the more cautious they became. But why would watching your portfolio more often cause you to end up a more conservative investor?

Remember that people attach stronger feelings to losses than to gains. Combine this with the fact that bull (up) markets tend to be longer and gentler compared to bear (down) markets which tend to be both short and rapid. The more frequently you look at your portfolio, the more menacing market drops become apparent. The less frequently you look, the easier it is to see the upward bias. The down times still occur, but you don’t notice them.

So gain your sanity, save your gut, and become a better investor: Don’t look at the markets too often. And maybe lay off some of the news as well.