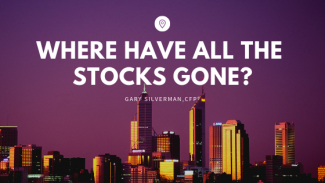 Where have all the stocks gone?

How many stocks are in the S&P 500? Generally, it’s not 500. I mean, they try to make it 500. But companies merge and split and some go bankrupt, so at any time they may have a few more or less than 500. The S&P can stay close because they choose the 500 biggest, more important publicly traded U.S. companies.

The Wilshire 5000, however, doesn’t get to be so picky. Pretty much all they do is find all the U.S. companies that are listed on U.S. exchanges and have a price. Once that was about 5,000 companies (hence the name). But back in 1998, it was as high as 7,562 companies. Makes sense; the United States has grown over the years and in the late ‘90s a lot of new companies were coming on line (semi-pun intended). But the last count I saw, the Wilshire 5000 reflected only 3,582 companies.

So where did half of the companies in the U.S. go in just 20 years?

Well, we know that the bursting ‘dot.com bubble’ took out quite a few of the newer firms, and the Financial Crisis a few years later took out some of the older names. But one of the reasons we have a lot fewer stocks is that they don’t end up on the exchanges…at least not for a long while.

Think of Silicon Valley—one of the places where a lot of companies start. The early days of any company are fraught with risks. So much so that trying to establish as a publicly traded company is just about nil. That’s where private investors come to play. These might be the founders themselves, family, friends, and, in some cases, private investing firms wanting to get in on the ground floor of a promising company.

It used to be that once the company has proven its business model and starts showing a profit, it could then go public and raise the funds to grow and expand. But that path is expensive, time-consuming, and requires a lot of public reporting. Sorry, but a public company is not allowed to keep its finances a secret. Nevertheless, if you needed a serious influx of cash you kinda had to do it.

Not so much anymore.

These days, especially in the tech area, there is a lot of private money available. No, if your idea is merely a pipe dream, you’re not going to get your hands on it. But if you are at or nearing the point where you would otherwise want to go public for funds to expand, there are now other, easier, and much less regulated places to get it.

What this means is that the Microsofts and Apples of the future either are not going to be available to the general public or they won’t show up until most of the dynamic growth of their youth and adolescence have already been captured financially by others.