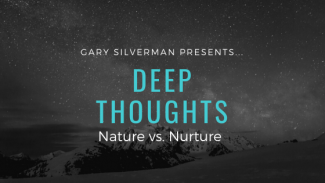 I’ll admit that the column this week has little to do with money (except that it deals with why you do what you do, and that certainly includes money). My message to you today: Give Up!
Let me explain.
I tend to wake up in the middle of the night thinking about things. The other night the nature/nurture question was the culprit. Most scientific studies about why we do what we do seem to blame two culprits: Our genes and our surroundings. While people often have strong opinions on the nature or nurture side of things, most would agree that it’s usually some combination of the two.
Let’s look at this a bit more closely. The nature side of you is mostly determined by the genetics you get from your biological parents. You have little control over this. The nurture comes from your environment. The location you live, your parental upbringing, weather, friends, etc. This you also have little control over.
But wait, you say. You can choose where you live and who you hang out with. Or can you? The scientific community would most frequently tell you that those choices are influenced by the nature and nurture preceding your decision. In other words, your nature/nurture made you do it.
You see this effect around you all the time. Tell me you haven’t said, “That kid didn’t have a chance given where he came from.” In that statement, you are saying it is not the kid that is in charge of his life, it is his genetics and surroundings.
The scales of this battle seem to tilt more often to the nature side of things. You’ve read the stories of twins separated at birth who, when finding each other later in life, note their similar taste in food, color, jobs, mates, etc. How much choice did they really have?
Of course, the ramifications of this is something hard to accept. If so, the criminal is not a criminal of their own fault…life has forced this on them. If you buy that, society should be condemned for condemning…except that the people of that society are being driven by their own nature/nurtures that they don’t control either.
I will often joke that everything is the parents’ fault. They provided the DNA and a tremendous amount of the nurturing. Yet, wouldn’t it be the parents’ parent’s fault. You can see that this would drive the “blame” to the beginning of time. And some scientists will tell you that indeed, from the moment of the big bang to now, everything is following an unalterable script.
By now some of you will have yelled at this paper something about choice by using the term “free will”. The trend in science is that the appearance of choice will eventually be eliminated as more and more studies are done.
I don’t buy that, which is why after doing all this thinking I went soundly to sleep. I wonder what made me chose to do so?