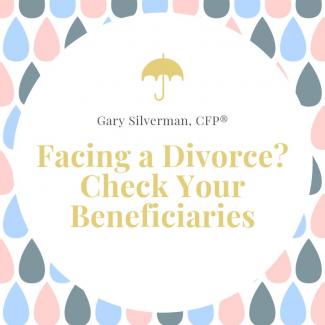 Divorce is a reality for close to half of those who marry. Once you go through it, you may first think that you never want to go through “it” again (“it” being the marriage and the divorce). The second thing you should think about are your beneficiaries. Unfortunately, this often doesn’t happen.
Let say that you were married to Fred. You probably listed Fred as your beneficiary for your IRA, life insurance, and 401(k) plan. You and Fred then divorce. What if you die many years later, never having changed anything concerning the IRA, insurance, and 401(k)? As many things go, it depends.
In Texas, and in 25 other states, beneficiary designations to your ex-spouse are automatically voided upon divorce. This means that your IRA will go to the contingent beneficiary, not your ex-spouse. If you don’t have a contingent beneficiary named, it would go to your estate. If you have a life insurance policy you bought privately, that too would now go to your estate, again unless you had a contingency beneficiary named.
Crucial differences are part of the life insurance provided by an employer and all those employer-based plans such as pensions and 401(k) plans. They are governed by the Employee Retirement Income Security Act (ERISA). My lawyer friend, Dan Campbell, says that the U.S. Supreme Court case Egelhoff v. Egelhoff decided that Federal laws trump state laws. This means once you set up a beneficiary on something governed by ERISA that beneficiary stays unless you change it to someone else.
Because of this, upon divorce those employer-based items will not go to your contingent beneficiary, they won’t go to your estate, they won’t even go to your new spouse…they all still go to Fred—your ex. This can be a rather big surprise to those left behind when you die. The repercussions of it can be so disruptive, you’ll be glad you are dead.
But you can take care of this easily. First, always name contingent beneficiaries. That protects your non-ERISA items. If you know you are going to be getting a divorce, get and complete all the beneficiary change forms from all of your insurance and investment providers. Then, once your divorce is finalized, date and sign the forms and send them in.
If you are already divorced and don’t remember what you did, don’t guess. Contact your providers to verify your beneficiaries and contingent beneficiaries. Lawyer Dan suggests that it’s still a good idea to send in a new beneficiary form for non-ERISA accounts, just in case.
That said, it is not all that unusual for someone to want their ex-spouse to continue to be the beneficiary. Remember, Texas law (and half the other states as well) voids that spouse beneficiary designation after divorce regardless of what you wanted to happen. So, if you want your ex-spouse Fred to be your beneficiary on all of your non-ERISA accounts after your divorce, make sure you send in a new beneficiary form for those accounts and name your Fred as the beneficiary.
And don’t forget, I’m not a lawyer nor do I play one on TV, so run all of this by your legal counsel and financial advisors.