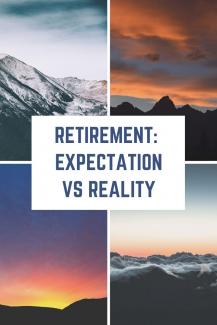 When are you going to retire?

More than likely you have a date in mind. It might be 62 when you can start drawing Social Security. It might be 65 when you think your “normal” retirement date is. Maybe it’s 67 or even 70.

In a recent article by Morningstar entitled When Retirement Expectations Meet Reality, David Blanchett did a dive into the data on expected versus actual retirement ages. It seems that the expected and actual retirement ages have been slowing creeping up over the last couple of decades. (I’m sure the financial crisis didn’t help.) But one thing has stayed pretty much the same. There’s about a four-year gap between expectations and reality.

According to a series of surveys of pre-retirees, the average expected age for retirement was 66 years old. The reality? 62. That’s a rather large gap. And that gap can cause all sorts of problems.

Consider Social Security: They’d have four less years of Social Security earnings and therefore a lower amount they’d in turn pay you when you start drawing. If the retiree not only retired at 62 but started drawing Social Security at the same time, they would be penalized with even lower payments due to the early withdrawals.

Then there’s the problem of living. I’m not sure how long the retirees are going to live in retirement (they probably don’t either), but I do know that retiring four years earlier results in four years longer being retired. So those smaller retirement savings, pensions, and Social Security payments have to pay for a longer lifetime.

Now, this four-year thing is not across all ages. What the researchers found is that the later in life you plan to retire, the earlier (relatively) you are likely to actually retire. In fact, a worker planning to retire at 57 tends to work a year longer than they anticipated. Those targeting 61 tend to retire right on time. But past there, for every year someone thought they’d work past age 61, the reality was about a half-year less.

The lesson to take from all of this is that “things happen” in that you may think and plan for a particular retirement date, but part of your planning should seriously consider what you’ll do if you need to retire earlier. Assuming that won’t happen is like assuming the market won’t drop, that you won’t need to go to the hospital, and that your flight won’t get cancelled.

Indeed, it might not happen, but knowing what you’d do if it does is what we call planning…financial or otherwise.