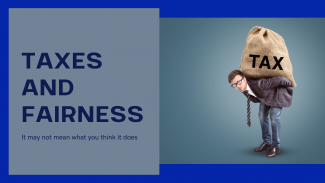 As society changes, the idea of what is fair changes with it; and often this involves money. In my continuing series, today I’m going to look at how to tax the rich.

Taxing the rich is quite popular. There tend to be two main concepts underlying this idea: First, they have money. Taxing goes much easier when you go after people who have money. Plus, they can more easily afford it. This works both from an absolute and percentage basis.

From an absolute aspect, say you need to raise $10,000. The Smith family earns $50,000 per year and the Jones family earns $450,000 per year. To be fair (from an absolute dollar standpoint) you would take $5000 away from each.  It’s clear that this will be much more detrimental to the standard of living of the Smith family.  On a percentage basis, you just took away 10% of their family’s income and only about 1% of the Jones’.

Now, instead of splitting the $10,000 equally, we could tax them on a percentage basis. The combined incomes of the two families is $500,000 so what if we taxed each 2% of their income? In this case the Smith family would pay $1000 in taxes while the more well-heeled Jones family would pay $9000. This seems more “fair.” But looks can be deceiving, and they don’t tell the whole story. The problem is that our country can’t live off of a 2% tax.

While calculations of this vary widely as to just how much the country needs to live on, for my example I’m going to try 15%. Now let’s apply this to our current example. At 15%, the Smith family will be responsible for $7500 of the bill, while our rich friends would pay $67,500. Wow, that’s quite a bit of a difference in dollar terms; but 15% is 15%, so it’s fair on a percentage basis. But let’s now look at what happened to the lifestyles of the Smiths and Joneses.

The Smiths just saw their take-home pay drop from $50,000 to $42,500. Do you think that their lifestyle might be compromised a bit? Some serious discussions will have to be made across the dinner table. Put off the knee replacement? Don’t replace the fence that is deteriorated? Tell the kids you can’t help with their college? And that vacation…maybe not.

On the other hand, the Jones family has dropped from enjoying $450,000 of income to only having $382,500 to live on. That’s still a 15% drop in take-home pay, and is certainly a bigger dollar amount, but will they have the same lifestyle choices that will have to be made?

Let’s face it, in their situation the knee would get fixed and so would the fence. If they choose to, the kids will get help going to college, and a vacation is still on the table. What will change for them is the degree of these choices. UT instead of Oxford. Coach instead of first class. Wood instead of brick.

Is that fair? Did both families suffer the same? Depends on how you see fair. We’ll look at that further next week.